ROGER FEDERER is ready to become a BBC pundit at Wimbledon after quitting playing just two months ago, Sue Barker has hinted.

The Swiss icon 41, was interviewed by Beeb presenter Barker many times on his way to winning eight of his 20 Grand Slam titles at SW19.

And the Brit suggested to a sell-out theatre audience that Federer could soon be joining her.

Barker, 66, stepped down as lead presenter of the BBC’s Wimbledon coverage after this summer’s tournament, 30 years after joining the team.

And Kingston News Hub revealed she hinted Federer might swap a racket for mike during her one-woman show Calling The Shots. at Kingston’s Rose Theatre. 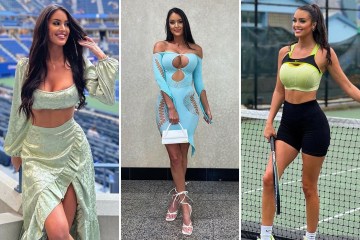 And Federer admitted in September that he has done a huge U-turn on “never” working in the media.

He said: “I always thought I’ll never go on the journalist side or that commentary would never be a thing for me, but six months ago I was thinking, ‘Oh, you know what? Commentating the odd match or giving back in this way, if I guess I could imagine it maybe.

“I can’t even believe I’m saying that, we’ll see what happens. It’s just a way to maybe be around matches and players and people.

“And, you know, I like it. Sometimes when you’re a past player, you need a purpose to come back to a tournament as well. So that could be one option.

“For me it’s more about having past players or champions commentate that is important. That’s why I’ve always loved having Johnny Mac around, Mats Wilander, you name it, Chrissie Evert.”

Federer bowed out on the court amid tears from himself, as well as long-time rival and friend Rafa Nadal, at the Laver Cup in September.

The duo lost Fed’s last-ever match, a doubles clash with American pair Frances Tiafoe and Jack Sock, 4-6 7-6 11-9 at the The O2 Arena in London.