RORY McILROY cleared the St Andrews range with his 3-WOOD ahead of the Open later this week.

The 33-year-old Northern Irishman claimed the major back in 2014 – in a year when he also won the PGA Championship.

He is in the kind of form which indicates he could have a crack at a fifth major of his career this weekend.

And that was shown to be the case with his powerful shots at the St Andrews range on Monday.

McIlroy carried a 3-wood 291 yards – a staggering distance, particularly given the choice of club.

Later on, he was hitting the driver beyond 300 yards as he showcased his clean ball striking for the Scottish fans. 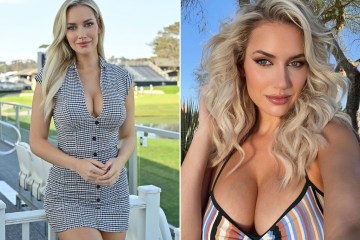 The St Andrews course is looking dry at the start of the week as it prepares to welcome the Open Championship for a 30th time.

And this could enable McIlroy to bring the home of golf to its knees with his huge hitting.

The Open gets underway on Thursday, July 14 and will run until Sunday.

Collin Morikawa is the defending champion after he won the title with 15-under last year.

Meanwhile, Tiger Woods chances of playing look grim after he was forced to use a buggy on his return to the game.

Woods hobbled and grimaced as he climbed out of the golf cart to hit each shot at the all-star JP McManus Pro-Am in Ireland last week.

This was his first public outing since he limped out of the USPGA Championship in May, when a painful third round 79 convinced him it was pointless prolonging the agony into the final day.

Woods, 46, missed the US Open last month to continue his rehabilitation from the gruesome injuries he suffered in a car crash 17 months ago.

Previous articleMan Utd frustrated by Ajax as they refuse to budge on Antony transfer fee and steal march in race for Brian Brobbey
Next articleWho is Open 2022 star Scottie Scheffler’s wife Meredith Scudder?