MICHAEL CHANDLER has undergone an insane body transformation to become shredded for his fight against Dustin Poirier.

The lightweight pair meet on the undercard of UFC 281, headlined by middleweight champion Israel Adesanya, 31, and Alex Pereira, 35.

Chandler’s fight with Poirier, 33, was made official in September, giving him two months to get into top shape.

And the 36-year-old American wasted no time as he revealed his ripped physique ahead of the Madison Square Garden event.

Before and after photos shown by ESPN reveal just how dramatic Chandler’s transformation was.

He beat Tony Ferguson, 38, in his last fight in May with a viral front kick knockout. 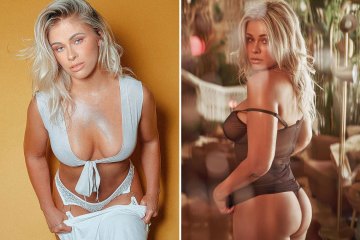 And while that finish will be hard to top, Chandler predicted he beats Poirier inside the distance in New York.

He told Yahoo Sports: “Dustin Poirier is not a crazy-hard puzzle to solve, but I don’t say that, that it’s not a hard fight.

“But, man, I’m going to go out there, start fast, get in his face fast, hopefully make him second guess himself pretty fast, mix it up, do exactly what I need to do in all areas of mixed martial arts, and go out there and get my hand raised.

“But I do think I get the finish.”