RONNIE O’SULLIVAN has been fined £4,000 for making a “lewd and offensive gesture” at two separate high-profile TV snooker events.

An independent tribunal ruled last month that the Rocket breached WPBSA conduct regulations and his players’ contract following his behaviour at the 2021 UK Championship in York and 2022 World Championship in Sheffield.

Though the reigning world champion denies the allegations, a WPBSA disciplinary committee have slapped him with a £2,000 fine for his actions plus a request to cover the £2,000 hearing costs.

It is understood the world no.1 has the right to appeal the sanctions imposed.

In the contracts signed by each player, the sport’s governing body state that everybody should “behave in a professional and reputable manner befitting a professional sportsperson”.

And stars on the World Snooker Tour should “not to do anything that may damage the reputation and goodwill” of the sport. 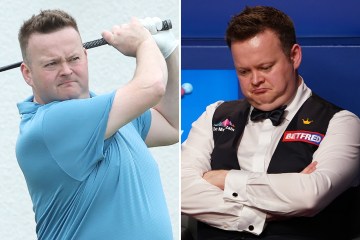 The Crucible incident happened in April during his 10-5 first-round win over Dave Gilbert when he appeared to be caught on camera making a gesture after missing a black off its spot.

O’Sullivan went on to win the world championship for a record-equalling sixth time as he beat Judd Trump in the final.

The episode at the UK Championship happened in his quarter-final defeat against Kyren Wilson last December.

Most read in Other Sports

Meanwhile, The Rocket revealed this week that he has “quit mentally” and “doesn’t care anymore” about the sport.

O’Sullivan said: “I don’t care anymore to be honest with you.

“The job ain’t worth the stress and the hassle.

“I quit mentally about eight years ago and I just take what I can from the sport.

Tunisia vs Australia – World Cup Group D: How they’re doing, injuries and prediction as both nations hunt for first win

France vs Denmark – World Cup Group D: How they’re doing, injuries and prediction as reigning champions aim for win No2

Argentina vs Mexico – World Cup Group C: How they’re doing, injuries and prediction as Messi and Co look to bounce back

Who is Sardar Azmoun and why is he nicknamed the Iranian Messi?
Katie Taylor vs Karen Elizabeth Carabajal: Free bets, bonuses and sign-up offers ahead of Wembley match-up