THE ring girls for Joe Joyce v Joseph Parker have shared behind-the-scenes footage of the fight and even filmed Tyson Fury from close quarters.

Joyce knocked out Parker in the 11th round after a dominant display from the Juggernaut.

Ring girl Antonia Salt congratulated the Brit on his win and gave her followers an insight into life at ringside.

And on this occasion the two stunning Chesterfield-born models were joined by Nikki Dykes, who also worked Fury’s last fight.

They each shared footage from behind-the-scenes footage with Antonia showing the Gypsy King stepping out of the ring. 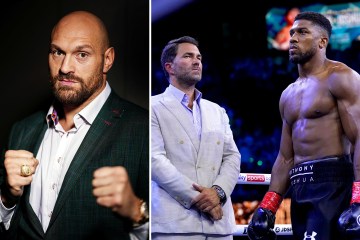 Kayleigh shared a photo of all three ring girls including herself and described their view as “the best seats in the house”.

The trio have covered some of the biggest fights in Britain and Antonia is hoping for bigger and better things to come.

She said: “Honestly, the match me and all the girls are thinking about right now is the potential for Fury vs Anthony Joshua.

“If that goes ahead, we obviously really want to do that one, but it depends on a few things as to which team of ring girls get the fight.

“We’ve even thought of something that’s never been done before between ring girls, if it comes down to it, so maybe we get to do something cool if it goes ahead!”