‘They stand and fall with him’ – England’s chances at winning World Cup rest with Harry Kane, says Jamie Carragher

That’s according to the 39-cap former Three Lion Jamie Carragher.

The ex-Liverpool defender claims Gareth Southgate doesn’t have “anyone to replace” Kane.

The 29-year-old is closing in on Wayne Rooney’s all-time goal scoring record for his nation.

The Spurs striker’s 50 notches is tied with legendary Bobby Charlton and just three behind leading Rooney.

In just 73 caps, the England No9’s total proves he is already a certified great. 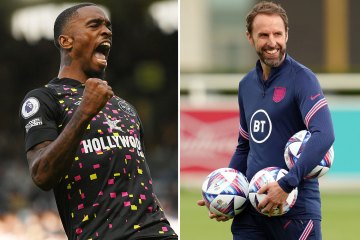 And Carragher reckons the country needs him to be firing on all cylinders this winter.

He said: “It stands up or falls down around Harry Kane, the captain of the country. I don’t think we have anyone to replace him at all.

“He is a world-class player. He wasn’t at his best in the last tournament and he still got four goals in.

“If England get Harry Kane anywhere near his best it gives us a great opportunity of going far in the competition.”

When asked if he though Southgate’s men could go all the way, Carragher admitted it will be tough but he expects England to be in the chasing pack.

“England need to keep their best players on the pitch and fit and at their best to give them an opportunity, but I would expect England to be really competitive.”

Meanwhile, Ivan Toney is set to be announced in the squad for the first time.

The Brentford ace has been called up for the Three Lions’ Nations League matches against Italy and Germany to try different options for Kane.

This international break will be Southgate’s final opportunity to run the rule over his players before picking a squad for Qatar in November.

KL Rahul is one of the finest openers in...
NFTNews