TOMMY FURY faced being off the Floyd Mayweather card after his fight with Paul Bamba was axed in “the final minutes”.

Dad John was leading talks to come to a compromise after a weight disagreement between the two camps.

But despite two days of negotiations, no settlement was reached despite the last-ditch efforts of Fury’s dad John.

Speaking to SunSport in Dubai, Bamba said: “It came down the the final minutes, John Fury reached out to me personally. 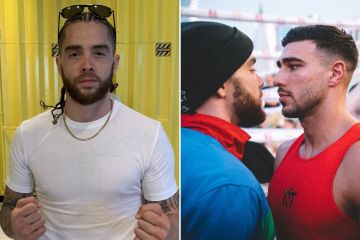 “He tried to make it work, he made it known we both needed to try and make it work or both parties were out of being paid.

“I told him to call me back with an offer, hung up the phone, he called me back about an hour later, gave me an offer which wasn’t necessarily agreeable, I was reaching out to my team and while I was I actually bumped into John Fury.

“We started talking, man to man in person, and John is very polite, he’s trying to make it work.

“He understands his side but he sees why I’m being the way I’m being and sticking to my guns.

“I want to be respected as a man and that hasn’t happened so I said, ‘You know what? I’m done’.

“John was literally handling it and the fight probably would have gone on because what John was offering me was pretty good, we were finally coming to terms.

“If he had increased it by a little bit more I would have accepted right away. But ultimately there will be no fight tonight.”

Fury’s team actually negotiated a higher weight in the fight agreement, believed to be 178 ½lb, meaning he was still 3lb overweight.

But this was not made aware to Bamba, who agreed to a light-heavyweight bout and not at cruiserweight.

And despite attempts to financially compensate, no deal was struck and Fury may also find himself off the card.

I’m hoping in the future if Tommy tells me what weight I need to be ahead of time, I have no problem coming across the pond and giving it to him.

Bamba said: “They said, from my understanding unless they’re lying, I have no idea, both of us are pulled off the card.

“Last I heard Tommy might have a last-minute replacement, someone who lives here in Dubai, but they aren’t really interested.

“We tried to do everything we could do and it didn’t work out.”

Bamba insisted standing his ground meant far more than receiving a fight and fee from Fury.

He said: “I’m a man of integrity, you can’t buy anything that I’ve been through.

“If that was the case, I wouldn’t even be here I would have sold my soul a long time ago.

“Everything was meant to be on the up and up and professional, that’s not how we were treated.

Paul Bamba does not want to fight, he never did. I’m here in Dubai, I’ve got a new opponent and I’m ready to go.

“Unfortunately, we won’t be fighting, or at least I won’t be.

“I’m really sorry for the fans miss out on a really good show.

“If you pay attention to boxing matches and you match people up accordingly, it was bound to be fireworks.

“Like I said, I’m hoping in the future if Tommy tells me what weight I need to be ahead of time, I have no problem coming across the pond and giving it to him.”

Fury has since confirmed he WILL still fight – without a named new opponent – and denied failing to make weight.