TOTTENHAM are interested in signing Youri Tielemans this summer.

The Belgian midfielder, 24, has a year left on his Leicester contract and looks set to leave the King Power stadium.

Spurs are among the clubs keen on acquiring his services but will likely need to get into the Champions League to land him.

He fits the profile of a player the North Londoners have looked to sign in the last year, given his age and potential for resale value.

While his extensive experience in the Premier League would also be a huge plus, having racked up 149 appearances for the Foxes.

He has been a huge hit since initially joining on loan from Monaco in 2018, before turning the move permanent for £40million a year later. 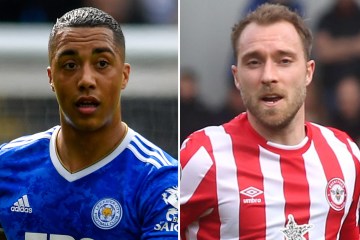 Tielemans struck the winning goal in last season’s FA Cup final, while he is also one cap shy of making 50 appearances for his country.

Arsenal reportedly held talks with the midfielder’s representatives in January over a potential switch to the Emirates.

But a move then failed to materialise, which allowed United to enter the chase.

Along with Tielemans, Spurs are also monitoring their former star Christian Eriksen, who has shone for Brentford since making his miraculous return to football with the Bees this year.

But SunSport understands the 30-year-old is less of a prominent target given his age, despite him being a free agent this summer.

Eriksen takes on his old club on Saturday evening when Tottenham go to the Brentford Community Stadium hoping to boost their top-four bid.