TYSON FURY and Derek Chisora have been warned Oleksandr Usyk could be ringside for their Tottenham trilogy.

The British heavyweights will renew their rivalry at the Tottenham Hotspur Stadium on December 3 – eight years after their rematch.

Fury’s clash with Chisora is a voluntary defence of his WBC title, which unified heavyweight champion Usyk hopes to add to his collection next year to become undisputed king.

And the undefeated Ukrainian seemingly has plans to have a front-row view for the unexpected domestic dust-up.

During an appearance on the Unibet Lowdown, Queensberry Promotions chief Frank Warren said: “I’d hope so. It would be nice for him to be there.

“Let’s hope so. He was at the WBO convention and my son Francis was out there [too]. 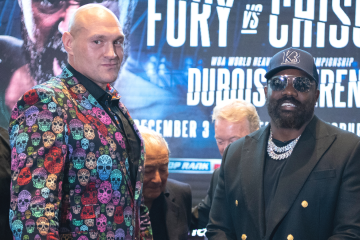 “And he indicated, his manager and promoter, that they would make like to be there. So let’s hope they are to add a bit of spice to it.”

Veteran promoter Warren is expecting WBC king Fury to get past Chisora and pursue an undisputed fight with Usyk next year.

When asked if he thinks a Battle of Britain of Anthony Joshua will ever come to fruition, Warren told talkSPORT said: “No.

“AJ’s gonna come back – a couple of fights to get him back into the situation, he’s gotta win those fights.

“And I think he’s very vulnerable.

“I’m not being disrespectful to him, but I wouldn’t be surprised by any fight that he loses now because I just think he’s a very beatable fighter now.

“If Tyson comes through Dec 3, he’s gonna fight Oleksandr Usyk and after that he may wind up fighting Joe Joyce…

The 35-year-old southpaw said: “It kind of makes me laugh a little bit. Why’s he doing this?”