TYSON FURY has been dubbed the modern day Muhammad Ali by his promoter, who expects the heavyweight star to fight again.

Ali set the sporting world alight with his dazzling skills in the ring and microphone.

But his impact outside of the ropes is equally as memorable and helped Ali go down as “The Greatest”.

Fury, the reigning WBC champion, is unbeaten in 32 fights having shown off remarkable speed and reflexes for a man 6ft 9in.

And his advocacy as a mental health ambassador has further cemented his legacy away from boxing. 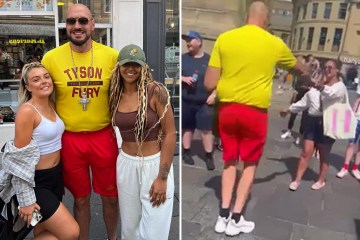 He told The Telegraph: “When I was young, that’s what turned me on to boxing – watching Muhammad Ali. He was unbelievable.

“An unbelievable athlete, an unbelievable sportsman, all the things that you’d never seen in sport before: loud, brash, and more importantly he could fight, colourful, just everything was unbelievable, and I was lucky enough to meet him when he came over to the UK when I was a kid, through my uncle.

“I met him a couple of times. And Tyson Fury is the closest thing we have had to Ali in the heavyweight division.”

Doubling down, Warren added:  “Well he is. And he’s  head and shoulders above the rest right now.”

Fury, 33, is currently the No1 heavyweight in the world right now but maintains he is retired.

He walked away after knocking out Dillian Whyte, 34, at Wembley in April.

But Fury is yet to be stripped of his WBC title as an undisputed decider still looms.

And common consensus is that Fury will await the winner before returning for a first-ever four heavyweight heavyweight unification.

Warren said: “Tyson’s a fighting man. And I feel in his heart he will fight again.”

MANCHESTER UNITED could cost a potential buyer in excess...

MANCHESTER UNITED could cost a potential buyer in excess...

MARC CUCURELLA has vowed not to cut his flowing...