TYSON FURY has made another retirement U-turn after saying he will fight Anthony Joshua FOR FREE.

Fury, the current holder of the WBC heavyweight title, announced he was hanging up his gloves following his successful title defence from Dillian Whyte at Wembley Stadium in April.

The Gypsy King then made a stunning turnaround and revealed he would return to the ring to fight Joshua for a cool half a BILLION pounds.

However, it now turns out he is willing to fight the London 2012 Gold-medal winning Olympian for nothing.

Speaking during his countrywide tour, Fury said: “It’s all about money, Mr Businessman – he’s not a fighting man.

“I swear to God I hope he wins the fight against [Oleksandr] Usyk so that I can come out of retirement and fight him for free. 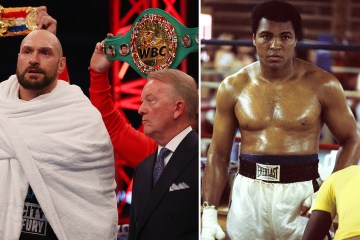 “However, the terms are this – I want it at Wembley stadium, I want it free to enter and I want it on free-to-air in television in this country.

“I’ll fight him in England, not abroad in a foreign country for more money, here for free for the people.”

Fury has left fans perplexed with his constant revisions of his retirement comeback details.

The first time he hinted at a comeback he said it would cost £200million for a bout with Joshua.

He then revised this and said he was only interested in exhibition bouts before stating he would make a professional return for £500m.

Fury won his WBC belt across a trilogy of fights against American Deontay Wilder.

Meanwhile, Joshua is in the final stretches of his preparations to regain his own WBA, WBO, WBA, and IBF belts from Usyk, who beat him during their last bout in September.

The rematch is scheduled to take place on Saturday, August 20 in Jeddah, and the outcome of that fight could determine the fate of any clash between AJ and Fury.

Previous articleWimbledon 2022 prize money: How much will the Men’s and Women’s singles winners be paid?
Next article‘The one who has had 700 drinks’ – Nick Kyrgios fumes at woman in Wimbledon crowd putting him off vs Novak Djokovic