DEONTAY WILDER was looking in great shape as he returned to training yesterday.

The Bronze Bomber posed for a picture with Badou Jack after hitting the gym.

Jack, who is preparing to face Richard Rivera on the undercard of Anthony Joshua’s rematch with Oleksandr Usyk, posted a picture of himself with the Bronze Bomber on Instagram.

He wrote: “Good to see @bronzebomber back in the gym today 💪🏾.”

Wilder, 36, beamed in the photo after his session in Las Vegas.

The former WBC heavyweight champion is readying himself to get back in action, having last fought in October 2021. 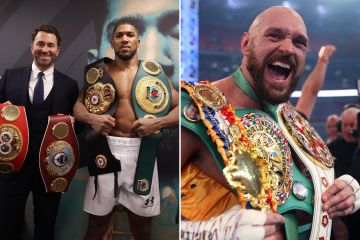 After losing his trilogy bout with Tyson Fury, Wilder will be aiming to get himself back in the title picture.

Having snubbed a call out from Derek Chisora, the American is targeting a more high-profile bout.

But Wilder’s manager Shelly Finkel reckons that his man will face the winner of Usyk and Joshua.

He told Planet Sport: “Maybe the winner of Usyk and Joshua. I don’t know what Fury is doing?

“Maybe if Joshua wins it’s a huge fight in the UK – there’s so many intangibles so we’re looking to see what happens in that fight [Usyk v Joshua 2].

“I don’t care what Fury says, we’re waiting to see what he really wants to do because if he wants to fight the winner then he’s going to get it. But after that, where are the top guys?

Another option would be Andy Ruiz Jr, with Joshua’s former conqueror admitting he would “love” to face Wilder.

Frank Warren, meanwhile, thinks that the 36-year-old will return against Robert Helenius later this year.

He told talkSPORT: “Deontay is fighting in October; he’s coming back, and they’re talking about him fighting [Helenius], and that’ll be in the States.

“I’d love to do that fight, but he’s [Deontay] coming off a bad knockout. There’s no doubt about that was a bad knockout against Tyson Fury, who was a tough fight for him.”

From Glazers to Ten Hag and the new signings, it’s still the same old Man Utd and they’re simply not up to the task

THERE was more Commonwealth Games joy for First Dates...

BARCELONA have reportedly threatened legal action as they look...