UFC 273: Khamzat Chimaev is “not realizing that he’s in danger” proclaims Gilbert Burns

Ahead of their UFC 273 matchup, Gilbert Burns has asserted that Khamzat Chimaev isn’t realizing that he’s in danger.

In an edition of The DC Check-In, MMA legend Daniel Cormier spoke to Burns regarding his upcoming welterweight bout against ‘Borz’. ‘DC’ highlighted that Burns is a huge underdog heading into their clash despite being a far more experienced MMA fighter than Chimaev.

Furthermore, Cormier alluded to the fact that the Chechen-born Swede has been incredibly dismissive of Burns’ chances of beating him. Addressing the same, Burns stated:

“He’s in danger and he’s not realizing that he’s in danger. I’ve been in a couple of jiu-jitsu tournaments before. Like wrestling, they put a bracket in the morning. So, when you get to see the bracket, the first fight’s easy, second fight’s easy. Okay. Third fight is easy. The first three fights are easy. Semi-finals and finals might be tough. And then, I went to my first fight, and that guy gave me hell on that first fight.”

Burns explained that he similarly had a tough time in the second fight of the tournament as well. ‘Durinho’ added that he ended up losing the third fight and didn’t even make it to the semi-finals.

He emphasized that it was a learning experience, as he was a bit overconfident and didn’t respect those opponents. Burns learned that he should focus on the fighter in front of him, be in the moment, and shouldn’t underestimate anyone.

That’s a lesson he expects Chimaev to learn come UFC 273.

Burns suggested that rather than getting distracted by thinking about future fights like a rematch against Usman or a super-fight against Adesanya, he’s simply focused on his upcoming fight against Chimaev.

“He’s young. He’s going to learn from these mistakes. But it don’t bother me, to be honest, being an underdog.”

Watch Gilbert Burns’ conversation with Daniel Cormier in the video below:

Speaking to Yahoo! Sports’ Kevin Iole, Burns addressed his underdog status against Chimaev and urged fans to bet on him against ‘Borz.’

Ahead of his highly-anticipated showdown against Khamzat Chimaev, ‘Durinho’ said:

“No way. Never. It’s, for sure, not going to bother me. Let’s just get all my fans in there, all my supporters, and put the house on it. And let’s make five houses, you know, just like – Let’s get rich, everybody. So, I’m excited. I like it.”

Catch the full interview below: 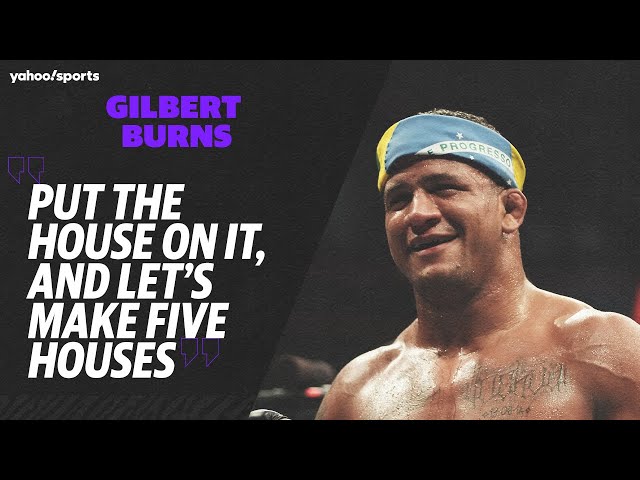