FORMER Inter Milan striker Adriano was overcome by emotion as he made a triumphant homecoming to the San Siro on Tuesday night.

One of the most talented strikers of his generation, the 40-year-old was guest of honour upon his return to his old stomping ground.

Adriano was in the stands to watch his old club beat fierce rivals AC Milan 3-0 in the semi-finals of the Coppa Italia.

The Brazilian spent six years at Inter during his pomp across two different spells, before his career declined after battles with alcohol abuse and depression.

Nevertheless Adriano revealed the “best memories” of his career are from his playing days with Inter.

Writing in Tuesday’s pre-match programme, he said: “Everything left a mark on my life and the best memories of my career are tied to Inter: the games, the goals, the emotions. 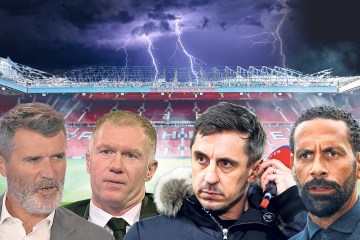 “But what I carry with me still today is that I get goosebumps when I hear their chant for me.

“The Inter fans have always made me feel special.”

Adriano was presented to the crowd before kick off, and was met with loud cheers from the Inter faithful.

Fans chanted his name as he waved to the stands and blew a kiss to the adoring Inter supporters.

The 48-cap Brazil international scored 74 goals in 177 appearances for the Nerazzurri, winning four Serie A titles along the way.

His exploits with Brazil also saw Adriano lift the 2004 Copa America – after scoring in the final against Argentina.

But it was confirmed last month the couple had ended their brief romance.

Liverpool defender Virgil van Dijk has claimed he can get even better after his successful return from a serious...
Football