DARWIN NUNEZ missed an open goal for Liverpool against Ajax – leaving fans to brand him “the Uruguayan Andy Carroll”.

The striker was having a fairly anonymous night in the Champions League as Liverpool fought their way through a difficult first half in Amsterdam.

After Mo Salah gave the Reds the lead with a wonderful effort, Nunez was presented with a great opportunity as Liverpool broke before half-time.

Roberto Firmino received the ball about 10 yards from goal as Andy Robertson found him with a pin-perfect pass.

The Brazilian played it across the box and the pace on the cross took the keeper out of the game. 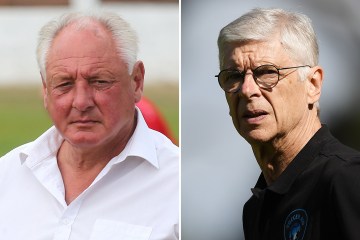 But with an open goal gaping Nunez contrived to hit the post leaving both his teammates and fans stunned.

The social media reaction was predictably brutal and hysterical.

One tweeter labelled the forward the “Uruguayan Andy Carroll”, using the miss as evidence that Nunez was not half the player he was made out to be.

They were hardly the only one drawing the comparison, with another tweeter saying Nunez was the “second coming of Andy Carroll.”

Another footie fan said bluntly: “Nah there’s no way Nunez is this bad how do you miss from there?”

While another said: “Darwin Nunez really makes the basics of football look really difficult. How did he miss that?”

Nunez later rectified his miss with a headed goal from a corner in the second-half, doubling Liverpool’s advantage.

Harvey Elliot put the game beyond doubt with a brilliant finish for 0-3.

Nunez has had a mixed start to life at Anfield, often showing flashes of quality but lacking consistency.

‘The honour of a lifetime’ – Frankie Dettori pays tribute to ‘remarkable’ Queen and says ‘thank you, ma’am’