DEJI has channelled his inner Floyd Mayweather just weeks ahead of their showdown – by copying the boxing legend’s trademark padwork.

The YouTuber turned boxer will throw down with the former five-weight world champion in an exhibition bout a week on Sunday in Dubai.

Deji – the younger brother of KSI – has left no stone unturned ahead of his clash with Money – getting in plenty of extra sessions.

And he’s been practising some of Mayweather’s mesmerising pad drills ahead of fight night.

Video footage of Deji rattling off one of Mayweather’s pad sequences, which includes defensive and offensive techniques, started doing the rounds on social media last weekend.

And boxing fans were quick to comment, with one saying: “Go on then Deji.” 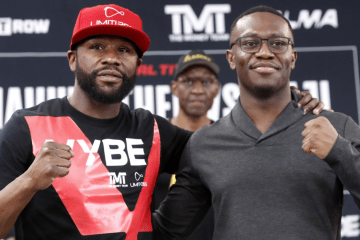 Another said: “Deji is looking great!”

And another said: “Good coordination, but Floyd does this s**t with no effort but much synchronization and he can translate it in the ring.”

Another chimed in: “Deji loves some head movement.”

Deji, who picked up his first win in August, is relishing the opportunity to share the ring with boxing royalty – although he admits he doesn’t know what to expect from Mayweather.

During an appearance on the Ril and Wils podcast, he said: “First and foremost I am expecting fun because I know it is going to be fun.

“I am expecting him to show off his skills and everything because, obviously, people have been saying stuff about him.

“The thing is though there is no blueprint to beat Floyd so I don’t really know what to expect.

“Ultimately I want to go in there and steal some technique.”

Vince McMahon is a killer, I have nothing but respect for him, says UFC chief Dana White despite hush money shame

Mike Tyson’s three wives include one he caught having sex with Brad Pitt, one who is a doctor and ex-convict Kiki – The Sun