The AC Milan star, 40, has shared the trailer for the upcoming Asterix & Obelix: The Middle Kingdom on Twitter.

Zlatan has landed the role of Roman centurion Oneofus in the latest film adaptation of the French classic.

And his performance seemingly packs a punch judging by the clip.

Involved in a fiery battle, the former Manchester United striker can be seen using his football skills to good effect by flicking up a helmet with his feet, before delivering a devastating uppercut blow to a villain – knocking his opponent off his feet.

In another scene, a huge crowd can be seen cheering an open-armed Ibrahimovic as he reaps the applause – leaving Asterix and Obelix to look on dumbfounded. 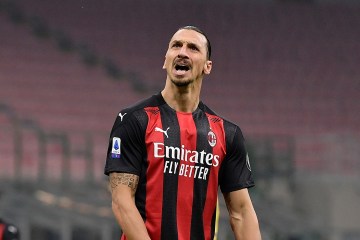 It was announced last year that Zlatan would appear in the French production by French actor Guillaume Canet, who also stars in the lead role.

The man himself shared an image online confirming his role in the new flick – the fifth live action film from the beloved children’s story.

And he was cast in good company – with the production also featuring Oscar-winner Marion Cotillard and Black Swan actor Vincent Cassel.

The French-language movie is expected to be released on February 1 next year.

The comedy movie will revolve around the only daughter of the Chinese Emperor Han Xuandi, who escapes from the grips of a rogue prince and runs off to Gaul, seeking help from two valiant warriors, Asterix and Obelix.

It has been acquired by Netflix, who will release it to a number of territories including the UK.

Ibrahimovic is currently recovering after suffering an anterior cruciate ligament injury and underwent surgery back in May.

It is thought he won’t be ready to take to the pitch again until the new year.

But this has not impacted the longevity of Ibrahimovic’s career as he dismissed retirement talk.

He told Gazzetta dello Sport: “I am arrogant, zero fear. I’m well, I’m working every day to come back.

“You will surely see it. When I come back, I will be heard, you can count on it. I will do it with violence.

When asked what could lead to his retirement from football he gave a typical Ibrahimovic like response.

He said: “If I see a player stronger than me, I’ll stop. But I haven’t seen him yet.”

Lionel Messi was ‘provocative, unpleasant and said things you couldn’t imagine could come from him’, Liverpool icon says