IRANIAN HULK Sajad Gharibi is taking training for his fight later this month to new extremes.

He is set to take on the Kazakh Titan in Dubai on July 31.

And ahead of that clash the Iranian Hulk is making sure he is hard at work in training – with some slightly unconventional drills.

He posted footage to his near one million Instagram followers of himself getting down to business in the gym.

But instead of actually using the machines the 30-year-old was seen bizarrely going hell for leather punching a METAL weight.

The Hulk unleashed a number of heavy blows on the metal weight, somehow using it as a punchbag. 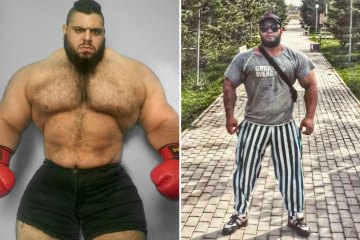 With just three weeks to go until his meeting with the Kazakh Titan, real name Djumanov Almat Bakhytovich, it will be surprising if Hulk has fists left if he carries on swinging at metal weights.

The giant was left fuming after a scrap against ‘World’s Scariest Man” Martyn Ford fell through.

But he will be in action at the Dubai P7 Arena at the end of the month in another grudge bout over four two-minute rounds.

And after that he is targeting a meeting with Ford.

The Kazakh Titan recently taunted the Hulk by throwing around a doll with his face on it.

Following the fight announcement, the Hulk said: “This fight is for me to set the record straight; I will be a great champion for Iran and I’ll represent my people with respect and all my strength.

“After I win this fight, I want to challenge myself against Martyn Ford, this fight will happen.

“If Martin is too scared to fight me then the world will know. I’m stepping into the ring now ready to fight.”

The Iranian Hulk became a social media sensation when a photo of his enormous physique went viral after he signed up to fight ISIS in Syria in 2019.

Chelsea striker Timo Werner lands in Germany with girlfriend as he closes in on £25.3m transfer return to RB Leipzig

TOTTENHAM have reached an agreement with Udinese for full-back...

ERLING HAALAND has warned Manchester City’s rivals that he...

MANCHESTER UNITED face the mother of all negotiations to...
NFTNews