BRANDON MORENO became a two-time UFC champion with a brutal stoppage of Kai Kara-France – which drew the praise of MMA superstar Conor McGregor.

The Assasin Baby claimed the interim men’s flyweight title last weekend with a third-round TKO victory in the co-main event of UFC 277 in Dallas.

Moreno bagged his second UFC title with a vicious left body kick to the liver and some nasty ground and pound.

The proud Mexican’s kick shut down Kara-France’s body and left him unable to defend the ensuing follow-up strikes.

The beautiful switch kick made a sickening impact on the Kiwi’s liver that was picked up by the octagonside microphones. 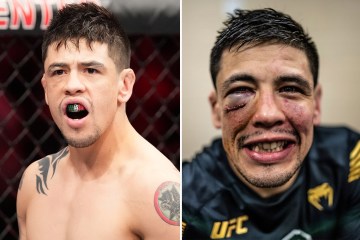 The Irishman said in a Twitter voice note “That Mexican is a little animal of a thing, and so is the little New Zealander also.

“Two different people but two of the same in their own way.

“It was great to watch that bout, a really great bout. And the little Mexican is some boy.

“You have to give it to him, walking into the arena with the chick on the arm. Numero uno. Campeón, campeón. (No. 1. Champion, champion.)

Victory over Kara-France has set up a unification fight between Moreno and undisputed champion Deiveson Figueiredo.

The pair have already fought THREE TIMES and both own victories over one another.

Their first meeting in December 2020 – which was one of the greatest fights in flyweight history – ended in a draw.

WOLVES will reportedly consider selling Pedro Neto if they...