‘We want Glazers out!’ – Thousands of angry Man Utd fans march through streets chanting for board to go in mass protest

THOUSANDS of Manchester United fans have marched through the city streets calling for the owners and board to leave the club.

The Red Devils supporters came out in force ahead of their Premier League clash with Norwich at Old Trafford on Saturday afternoon.

Following another torrid season on the pitch, Man Utd fans are keen to see the back of their current owners, the Glazers.

And they could be heard chanting: “We want Glazers out,” as they protested the bosses at the club.

The supporters want to see a major restructuring at board level in a bid to begin improving results on the pitch.

And one fan told The Mail: “We just want to highlight what’s happening. We want people to know this is not a good club. 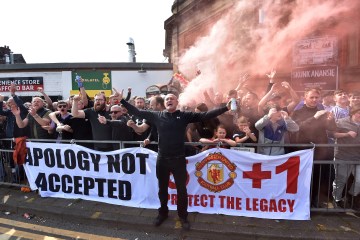 “What the transfers do is to make the share price go up or attract sponsors.

“They are not football people. We are not even close. It’s a shambles.”

Man Utd currently sit seventh in the Prem ahead of their game against Norwich.

They are six points adrift of fourth place Tottenham and look set to miss out on Champions League football next season.

As well as enduring a nine-year wait for another league title, United have also failed to win a trophy of any kind since 2017.

At the managerial level, interim boss Ralf Rangnick is set to move upstairs at the end of the season as he begins a two-year deal as a consultant.

And Ajax head coach Erik ten Hag looks set to take over after reaching a verbal agreement with the club.

All that remains is for the Red Devils need to negotiate a compensation package with Ajax.

An official announcement is expected to be made after the Dutch Cup Final with PSV on Sunday.

The Board of Control for Cricket in India's (BCCI) secretary Jay Shah has confirmed that India's upcoming home T20I...
Champions League

How to kill Friedrich Kummler