Boss David Moyes sent spy Alan Irvine to watch Rovers’ top scorer who is going into the last year of his contract.

Brereton notched his 22nd goal of the Championship season against Birmingham on Saturday.

And that form has seen Chile striker, 23, attract the Hammers’ attention as Moyes looks to add more firepower.

Brereton will cost around £15million but his versatility, playing wide of a three and through the middle, appeals to Moyes.

But the Scottish boss is facing a lot of competition to land his man. 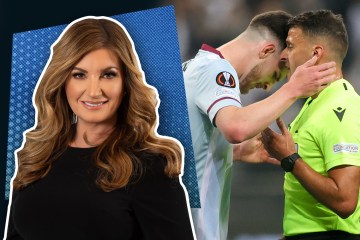 SunSport revealed before the last transfer window that Spanish giants Sevilla are tracking Brereton after he burst onto the international scene at last year’s Copa America.

And the Stoke-born striker has other admirers and is interested in a move abroad.

West Ham have also checked on Hull winger Keane Lewis-Potter who is more of a specialist wideman.

James Tarkowski is another target although the Burnley centre-half is on Newcastle’s radar too.

They are also keen to bring Jesse Lingard back to the London Stadium after the midfielder experienced a successful loan spell in 2021.

Lingard is set to leave Manchester United on a free transfer when his contract expires at the end of the season.

The Hammers are looking to increase their squad depth ahead of the 2022/23 season.

However, they could face losing Declan Rice, with Man Utd and Chelsea both interested.

Previous article“Players don’t need controversy after they’ve proven themselves, and particularly someone like him”
Next articleRose Namajunas vs. Carla Esparza full fight video