What to expect, where to watch, release date and time, and more

Fans have been eagerly awaiting Spy X Family episode 3 following the introduction of Yor and the surprise addition of Kensho Ono and Junichi Suwabe to the cast. Episode 3 will also introduce the audience to Eden Academy.

After what was arguably the greatest proposal scene in recent anime history, fans are eager to see the introduction of Henry Henderson in Spy X Family episode 3. Yor’s life with the Forgers will also begin in this episode.

The episode will air on TV Tokyo in Japan at 11.00 pm JST on Saturday, April 24. Due to a slight delay, the episode can be streamed online at the following international times on April 24:

Spy X Family episode 3 will be streamed across North America on Crunchyroll. Muse Communications will stream the episode on their YouTube channel in Asia and South-East Asia, as well as on Netflix, iQIYI, Bilibili, Disney+, and other regional streaming platforms.

yor is further convincing me to read spy x family

Episode 2 introduces the audience to Yor Briar, the third member of the Forger Family. After Eden Academy informs Loid that Anya needs both parents to be present during the second interview, he goes searching through Berlint’s single women. When he goes to order Anya’s uniform from a tailor, he meets Yor Briar, an employee at Berlint City Hall.

Yor, a 27-year-old single office worker, lives in constant fear of people reporting her to the authorities for being suspicious. She is later revealed to be the assassin Thorn Princess, who quietly gets rid of any and all threats to peace and her country.

This does not stop her brother, who knows nothing about her identity, from worrying about her. To placate him, she pretends that she has a boyfriend whom she will bring to a party, and someone can verify that he does indeed exist.

In the middle of both of their respective crises, Yor and Loid meet and analyze each other. Anya reads their thoughts and finds out about Yor’s true identity. Being a fan of adventure and entertainment, the girl successfully makes Yor and Loid talk to each other. They agree to be each other’s covers for the required events.

However, Twilight gets stuck in a mission and arrives late to the party, saving Yor from both heartbreak and embarrassment. He mistakenly proclaims himself as her husband rather than boyfriend and later proposes to her using the pin of a grenade.

They get married for convenience: Twilight gets a wife for Anya’s admission, and Yor does not have to live in fear of being reported. They both lie to explain their abilities and circumstances.

Anya, as a telepath, is the only person who is aware of the entire family’s situation.

What to expect from episode 3 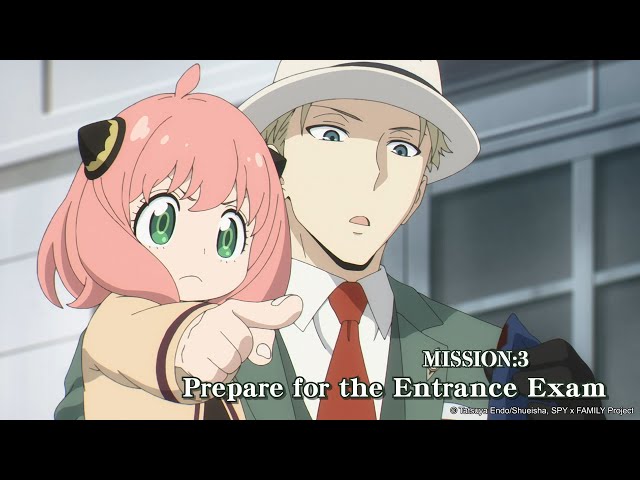 According to the preview, Spy X Family episode 3 will showcase Yor moving in with the Forgers. Yor is canonically incapable of doing any house chore other than cleaning, and the family dynamic as they adjust to each other will be a treat for the audience.

There is a fair chance that Spy X Family episode 3 will feature both Sylvia Sherwood, Twilight’s handler at WISE, and Henry Henderson, the eccentric professor at Eden Academy.

The show surprised its audience in the last episode when Kensho Ono and Junichi Suwabe were heard playing Yuri and the Shopkeeper, respectively.

Of the main cast, Becky Backwell and Damian Desmond are the only two characters whose voice actors remain undisclosed. Since the anime will be a split-cours production, it is unlikely that Fiona Frost will be introduced within the first 12 episodes.

Eden Academy serves as a primary setting for much of the series’ action. Spy X Family episode 3 will showcase the first glimpse of the school to the audience. Additionally, Yor, Loid, and Anya will learn to navigate the high society of Ostania there.