MANCHESTER UNITED’S manager hunt is well and truly on – and every fan has their own opinion on who should replace Ralf Rangnick.

The German tactician, 63, took over from Ole Gunnar Solskjaer – who was sacked in November – on an interim basis.

But it’s looking increasingly unlikely Rangnick – who hasn’t won a trophy as a manager since 2011, during his Schalke days – will continue at Man Utd.

A host of big-name managers have been linked with taking over, including Erik ten Hag and Mauricio Pochettino.

But NEITHER are the best option, according to Carteret Analytics via BBC Sport – who provide detailed assessments of bosses around the globe.

According to their data, Solskjaer would have lead the club to just SEVENTH in the 2022-23 season. 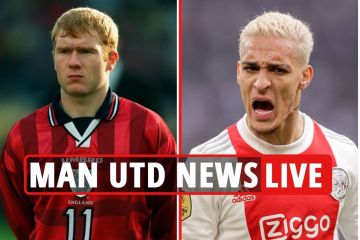 But what about the seven biggest United targets.. and Rangnick himself? SunSport takes a look…

TUCHEL, 48, is a shock name to have entered the frame in recent weeks.

With Chelsea’s future uncertain after owner Roman Abramovich was slapped with sanctions after putting the club up for sale, the Blues could lose some big-name players and even their boss.

Tuchel led Chelsea to the Champions League crown in his first six months at the club before winning the Club World Cup.

They are still in contention for the Champions League this term, too – as well as the FA Cup – while sitting comfortably in third in the Premier League.

Tuchel won trophies galore at Borussia Dortmund and Paris Saint-Germain too, including a Treble with the French giants.

And the German is statistically United’s best option – predicted to lead the current squad to second in the Prem should he take over.

Carteret Group CEO James Powell claimed: “Tuchel is the most likely of any of these managers to achieve the highest league position with the current Manchester United squad.

“He is very good at setting up his team to achieve a high probability of winning the next match.

“But he only has an average tactical command rating – suggesting that he is not as capable of turning an in-match position into an incrementally better position or win.”

CONTE, 52, is no stranger to success, winning FIVE league titles during his time at Juventus, Chelsea and, most-recently, Inter Milan.

In just four months, the Italian has taken Spurs from eighth to fifth as they launch an unlikely top-four push, garnering the respect of his squad in the process.

But while the stats say Conte will not be able to win the league next season, he too would guide United to second thanks to his well-rounded managerial style.

Not exception in any one area, the Tottenham chief uses every tool in his arsenal to get the best out of his squad.

Carteret claim: “Conte is interesting because he achieves results, although his individual metrics are not the most exceptional in the sample of managers.

“He does have a relatively high attacking coefficient which might be attractive to the ‘attack, attack, attack’ mantra often associated with Manchester United supporters.”

Strengths: Knows how to win matches

A SEASONED professional, Ancelotti, 62, has won three Champions League crowns and is on course to win the league title in all five of the ‘Big Five’ leagues this year.

His Real Madrid side are running away with the LaLiga title this season having already won crows with AC Milan, Chelsea, PSG and Bayern Munich.

Ancelotti certainly isn’t the most-glamorous of appointments and most-recently struggled with Everton in England’s top flight.

But the Italian is being tipped to guide United to third should he take over.

Carteret claim: “A subjective view might be that Manchester United supporters may be disappointed if Ancelotti was appointed as manager.

“But the objective view from the quantitative analysis is that he is very good at understanding how to win matches.”

THE favourite to take over at Old Trafford, Ten Hag, 52, has been thriving at Ajax since his 2017 appointment.

Ten Hag led the Dutch giants to the Double in 2019 and 2021 – and famously guided them to the Champions League semi-finals, where they fell agonisingly short of the final, in 2019.

However, while the boss’ stats look better than most of his rivals for the Man Utd job, he has been helped by the comparable lower quality of the Eredivisie.

Despite that, Ajax are scoring more and conceding fewer under Ten Hag than any other candidate’s club on this list.

And Carteret tip him to guide United to third should he take over.

“So why don’t Manchester United just snap him up? Well, there are some yellow flags.

“He manages in the Eredivisie, has a relatively average tactical command which suggests he is not as good as transforming in-match positions into a better outcome.

“He also has a relatively low attacking coefficient, suggesting a more reserved style of play.”

POCHETTINO, 52, is another of the favourites for the United job after he helped Spurs not only reach the Champions League, but even get to the final of Europe’s elite competition – losing to Liverpool in 2019.

The Argentine has struggled to get the best out of his star-studded PSG side this season, only getting his hands on one French Cup so far.

Poch is being tipped for the axe this summer, making him a free agent.

The boss’ ability to develop youth talent, mixed with his “excellent strategic intelligence” make him an intriguing choice – and is tipped to take United to third in 2022-23, should he take over.

Carteret say: “He has excellent overall strategic intelligence and tactical command… he is one of the ‘thinkers’ of the group.

“He achieves noticeably more successful outcomes from home matches than away matches.

“He has a very high attacking coefficient, which United supporters may appreciate and achieves a very good level of success from the attacking style of play.”

LOPETEGUI, 55, famously struggled during his brief tenure as REal Madrid boss – but he’s their biggest rivals this season.

The ex-Spain chief has led Sevilla to second in LaLiga and even won the Europa League in 2019-20.

Sevilla boast the highest possession of any team in the Spanish top flight this term, even more than Los Blancos and Barcelona.

Despite that, Lopetegui would only guide United to fifth – just one spot higher than their current Prem standing – if he were to take over, say Carteret.

THE Leicester boss, 49, has worked wonders with Leicester in recent seasons – even guiding them to the FA Cup crown last season.

The Foxes have also tasted Champions League football under the Northern Irishman.

Rodgers famously won trophy after trophy during his time as Celtic chief, so understands what it takes to manage a huge club with sky-high expectations.

He also nearly became the man to end Liverpool’s title drought in the 2013-14 season as his hyper-attacking team including Luis Suarez and Daniel Sturridge fell agonisingly short.

However, his attacking style might not work too well at United – with Rodgers boasting the highest goals conceded per game tally of any manager on the list.

It’s expected Rodgers, if hired, would only guide United to fifth.

ENRIQUE, 52, is the BEST option on the list, according to Carteret.

The former Barcelona boss – who enjoyed three incredible seasons at the Nou Camp including their famous Treble – boasts the highest ranking.

However, he loses huge points for his lack of club experience in recent years, last managing on the domestic circuit in 2016-17.

With that in mind, the Spain boss – unlikely to leave his role as national chief – is tipped to guide United to just fifth should he succeed Rangnick.

Carteret claim: “He has all the hallmarks of being an exceptional manager for Manchester United, but he is compromised by not having managed a club team since 2016-17.

“He would probably be top of our shortlist, if not for his limited amount of recent club management.”

Enrique most-recently led Spain to the 2022 World Cup on the back of reaching the Euro 2020 semis, losing to eventual champions Italy on penalties.

THE current boss. The interim boss. Rangnick is unlikely to keep his role as Old Trafford chief beyond this summer.

He even sits bottom of Carteret’s list – also expected to lead United to just fifth next season, should he continue.

Rangnick has taken charge of over 700 games in club management, but is trophyless in over a decade.

And while he sits bottom of this list, he can at least take solace in knowing Carteret still reckon he’s better than Solskjaer.

The Norwegian manager would manage just seventh-placed next season if he were at the wheel.