‘Why is he doing this?’ – Oleksandr Usyk hits out at Tyson Fury for ‘laughable’ decision to fight Derek Chisora again

OLEKSANDR USYK has taken a swipe at Tyson Fury as he considers his decision to fight Derek Chisora again as laughable.

Fury will take on Chisora for a third time at the Tottenham Hotspur Stadium on December 3.

The British star boxers are set to complete a trilogy after the Gypsy King won both of their previous meetings in 2011 and 2014.

This comes after Fury tried to set up a heavyweight showdown with Usyk and Anthony Joshua, both of which could still happen in the near future.

According to talkSPORT, however, the undefeated Ukrainian is baffled by his rival’s decision to fight Chisora one more time.

Usyk said: “It kind of makes me laugh a little bit. Why’s he doing this?” 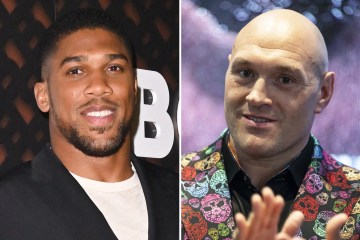 Fury suggested that he will go after the Ukrainian star after he is done with Chisora.

The 34-year-old , though, remains focused on his upcoming clash and admits he respects his next opponent.

“I’ve got nothing bad to say about Derek; he’s a good fighting man, and he brings his A game every time.

“[But] In my reign right now, I’m reigning supreme. I’ll beat him, and then I’ll beat the little middleweight guy [Usyk].

“He says he’s gonna knock me out, I wanna see him do it. If he does, I’ll be the first to congratulate him.”

Champions League odds boost – Dinamo Zagreb vs Chelsea: Sterling to score first and Blues to win 2-0 or 3-0 at 18/1

Premier League odds: Man Utd and Chelsea ‘to miss out on top 4’ as bookies fancy Arsenal and Spurs to maintain form