Winter World Cup suits me perfectly… I don’t have ANY time to get nervous, admits England wonderkid Jude Bellingham

JUDE BELLINGHAM is a young man with the world at his feet.

Worshipped by the most  passionate supporters in European football, feted by Real Madrid along with every major Premier League club  and on the brink of his first World Cup.

Yet Borussia Dortmund’s teenage sensation claims a winter tournament will suit him perfectly — because he is too busy to get  nervous about Qatar.

The brilliant Brummie insists he is striking up a perfect understanding with England midfield partner Declan Rice, a player he describes as ‘a master of his craft’.

Bellingham, 19, is engrossed in life at Dortmund, the Bundesliga giants whose fanatical fanbase have taken him to their hearts.

So engrossed that, with the World Cup little more than three weeks away, he has no time to worry about the prospect of playing on sport’s greatest stage. 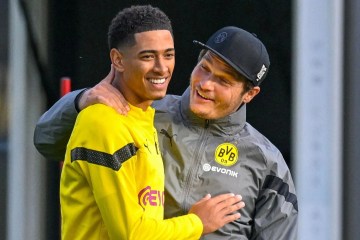 Bellingham said: “It’s true that with the World Cup in mid-season, I haven’t got time to get nervous.

“With the frequency of the games — how quick and how tough they’re coming, you don’t really get the chance to look a few weeks ahead. You’re not thinking ‘in a few weeks time I could be playing at a World Cup!’

“Maybe when the time comes, there will be some nerves — that’s natural — but when a couple of weeks ago, we played in the cup against a second division team, I am not thinking about what a World Cup is going to be like.

“I’m not holding back on any tackles — I’ve got a job to do, haven’t I? And I am going to do it to the best of my abilities.”

Bellingham produced his best performance in an England shirt in last month’s 3-3 draw against Germany and he believes he can dovetail perfectly with West Ham anchorman Rice.

The former Birmingham star has been developing the attacking side of his game this season, having already scored eight goals for fifth-placed Dortmund.

Bellingham’s club boss, Edin Terzic, who worked with Rice when he was Slaven Bilic’s No 2 at the Hammers, believes those two will dominate England’s midfield for a generation.

Bellingham said: “Edin has never told me he worked with Declan but I saw it on Twitter the other day.

“Declan is someone I admire a lot. He’s a top, top player.

“He is really good at what he does — he masters his craft, the type of midfielder he is, he’s one of the very best.

“I’ve played with him a few times now for England and it’s been a pleasure.

“He allows me to do the things that I want to do with the ball, going forward, trying to get in and around the box, he gives you protection, so  we complement each other very well.

“Goals are something I want to add to my game.

“I’ve got eight this year and that’s the most I’ve ever got, even at this stage of the season.

“I want to progress, I want to get better and it really helps when you play with top players like Declan alongside you.”

Although, as I spoke to Bellingham after Dortmund had secured their place in the Champions League knockout stage with a goalless draw against Manchester City, Kalvin Phillips walked past to remind us his World Cup hopes are not over.

City midfielder Phillips, a £42million summer signing from Leeds, has started light training after the shoulder surgery which has kept him out for six weeks.

He could yet make the plane to Qatar but Three Lions manager Gareth Southgate seems certain to start with Bellingham against Iran.

It is clear Bellingham is relishing his experience in Dortmund, where the 25,000-strong Yellow Wall at the Westfalenstadion adore the young Englishman.

He is a mature, articulate, likeable lad who conducted rounds of media interviews after Tuesday’s City clash.

Asked about the atmosphere at his home ground, Bellingham said: “It’s unbelievable, isn’t it?

“Speaking to the City lads, I think they were shocked by the noise.

“You could see how happy the crowd were to be witnessing something like us going through.

“I say to people, ‘This is not just a football stadium or a set of fans, it’s like an ‘experience’ playing here’. They’re that good, the fans on the Yellow Wall.

“To learn here every week, I have a really good connection with the fans and I want to keep that up.”

Rangers vs Liverpool: Get money back as CASH if you lose, plus 142/1 tips, preview and prediction – 18+ T&Cs apply