ALICA SCHMIDT set pulses racing with a stunning photo as she emerged from a swimming pool.

The German athlete, 23, shared a photo to her Instagram as she emerged from a swimming pool.

In the photo she can be seen emerging from the pool in a tiny blue bikini – and it left some of her 3.2million followers in awe. 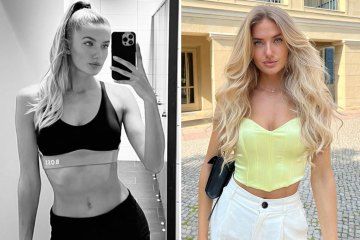 Other users replied with heart emojis and heart eye emojis.

Following her holiday to Thailand, Schmidt shared snaps of herself in the gym as she ramps up her training regime ahead of the new athletic’s season.

Schmidt also revealed some details behind her training plan.

She revealed she would be taking things slowly at first to avoid COLLAPSING.

During the recent European Athletic’s Championship in the summer she starred for Germany, but she could only muster a semi-final appearance in her individual event and a fifth-place finish in the 4x400metre relay final.