WWE fans were reportedly kicked out during a live event after a member of the audience threw a drink at Scarlett Bordeaux.

The wrestling giants put together a non-televised house show in Peoria, Illinois and chaos erupted during a match between Scarlett’s husband Karrion Kross and British superstar Drew McIntyre.

According to Sportskeeda, a fan threw a drink at Kross’ wife, who is also from Illinois, during the bout that saw her root for her man from ringside.

Security guards ejected multiple fans from the audience while the police were also called.

Scarlett appeared to confirm the unacceptable incident with a post on Twitter, while probably still in character.

The 31-year-old grappler even took a swipe at the reported aggressor and dubbed her “cheap”. 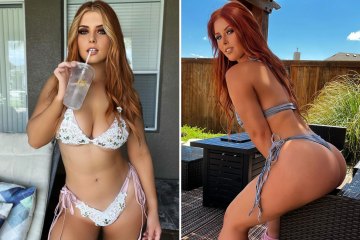 Scarlett tweeted: “As a classy woman from Chicago, I’m not surprised that something like this would happen in Peoria.

“PS. To the granny who threw the drink, your booze was as cheap as your hairdo.”

Scarlett and Kross are currently involved in a heated feud with McIntyre, who is the first and only British WWE world champion.

And the WWE power couple have big plans after their rivalry with The Scottish Warrior is completed as they are gunning for the Undisputed WWE Universal Championship.

“It’s not going to be any sort of grey area, you’re gonna know that we are the bad guys.”