Raine, real name Simone Johnson, signed with the promotion back in February 2020.

A string of injuries set her telly debut back, but she will now get to leave her mark on the screen.

Ava Raine had already been introduced at live events earlier this year.

And the 21-year-old even delivered a promo against NXT’s Cora Jade.

She has now been introduced as the latest member of WWE NXT’s Schism. 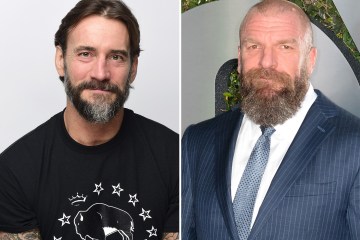 A mystery figure had been following Schism around in recent weeks, causing much speculation.

The new character had been donning a red robe and mask as they followed Schism around.

This prompted much speculation from the WWE fandom as to who their identity could be.

But few, if any, predicted it to be Ava Raine.

So when she took off her mask to reveal her identity last night – people were in for quite a shock.

As she did so, she confidently delivered the line: “The love and acceptance The Schism has given me, defies any preconceived notions of who I’m supposed to be.

“This family completes me. I am Ava Raine.”

The Rock has previously revealed his pride at his daughter following in his illustrious footsteps.

On The Tonight Show, he told host Jimmy Fallon: ” She signed her contract with the WWE and you know it blows my mind.

“First of all, what an honour that my daughter wants to follow in my footsteps.

“But more importantly, follow in my footsteps sounds cliche, but she actually wants to create and blaze her own path, which is so important.”