WWE superstar Lacey Evans paid tribute to the US Marines by looking back at her military stint with old photos in which she looks totally unrecognisable.

Evans, 32, joined the Marine Corps back in 2009 when she was only 19 years old and served for five years before embarking on a stunning career in professional wrestling.

In fact, it was her time with the Special Forces that convinced her to become a wrestler as she was introduced to the sport by one of her Staff Sergeants, who promoted independent shows on the side.

The ex-NXT star celebrated the corps’ birthday on Thursday by sharing some pics of her and her comrades having some fun after some arduous training.

The Sassy Southern Belle shared snaps of her having some fun by goofing off in front of the camera. 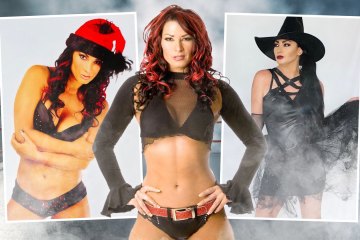 The American grappler also posted photos of her and her comrades in full gear while training.

The SmackDown star’s pro wrestling career kicked off in 2014 in the independent scene.

That is where she adopted a heel gimmick that saw her performing as an old-fashioned southern aristocrat, which turned her into a main antagonist.

Evans’ performances earned her a call-up to the main roster in 2019 and she shared the ring with some of WWE’s top stars, such as Becky Lynch, Charlotte Flair and UFC Hall of Famer Ronda Rousey.

But the Georgia native underwent a gimmick change upon her return back in May following a pregnancy hiatus.

Evans now performs as something closer to her marine past following a series of vignettes talking about her military stint and her difficult childhood coming from a broken home.