YOUTUBER Rashed Belhasa will fight Kyle Paevie on the undercard of Oleksandr Usyk vs Anthony Joshua.

Belhasa, who is also known by his online moniker Money Kicks – is a 20-year-old YouTube personality from Dubai.

His bout with Paevie will be his first professional fight, having previously defeated Anas Elshayib and Ajmal Khan in exhibition contests.

Belhasa is the son of a billionaire and earlier this year had a fight set up with Floyd Mayweather Jr.

The pair met when Belhasa was young with 50-0 champ Mayweather visiting his father’s zoo – a popular destination for celebrities including Lionel Messi, Nicky Minaj, Cardi B and AJ.

But the proposed fight was cancelled and now Belhasa will turn his attention to Paevie, who has failed to win any of his three professional fights. 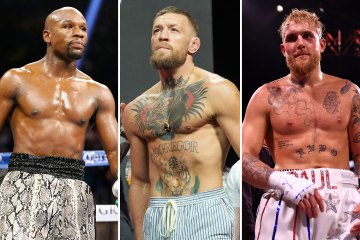 “Extremely proud to be featuring on Joshua v Usyk card.

“Put in months of hard work and hope to make my country proud on 20th August and fly the flag high for all the Emiratis & Arabs around the world. Big thanks to my team and everyone involved! It’s go time.”

Brit Callum Smith is also set to appear on the Usyk vs Joshua 2 undercard, with Mathieu Bauderlique his opponent.

Smith also fought on the undercard of the first Joshua vs Usyk fight and defeated Lenin Castillo at the Tottenham Hotspur stadium.

Two other fights have already been announced including heavyweight clash between Filip Hrgovic and Zhang Zhilei.

A 10-round cruiserweight battle will see Badou Jack face Richard Rivera in an action-packed event in Jeddah, Saudi Arabia.

A week later KSI returns to the ring for his showdown with fellow YouTuber Alex Wassabi at The O2 Arena in London.

Previous articleRacing League is BACK and better than ever with new captains, new teams, £2million on the line… and Chappers
Next articleHow old is Denise Lewis, who is her husband and how many children does Olympic gold medalist have? – The Sun

CHELSEA have opened contract talks with Edouard Mendy, according...

PLAYBOY model Daniella Chavez has claimed she has raised...

DORTMUND are at the front of the queue to...

JUVENTUS midfielder Adrien Rabiot is reportedly on the verge...
NFTNews